The size of market of Internet of Things (IoT) will by the year 2027 have surpassed 8,67 billion USD | EBT conference 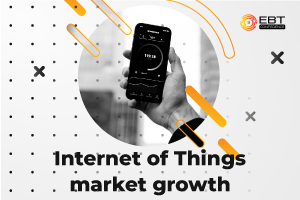 According to the research of Market Research Future (MRFR) it is estimated that the market of IoT (Internet of things) will reach 8,67 billion dollars, rising at a compound annual growth rate from 31,2% until 2027.

The use of IoT in agriculture has a positive influence on this market. Precision agriculture makes use of tools for mapping, robots, GPS; artificial intelligence, sensors and different forms of software for data analyses of adaptations to observance of plants. Urbanization trend to which the world strives for also encourages growth of the market. Countries are investing in smart cities and increasing fundings for digital bio networks.

Lack of experts for IoT, uncertain compatibility and regulatory environment, as well as concern for safety and data privacy could lead to limitations of the market in a calculated period of time. Data migration with outdated systems could come across as a challenge to the market during the calculated period. Apart from that, lack of consciousness, especially in undeveloped regions, as well as lack of Internet connection could also hinder the growth of the market.

Globally, the IoT market is categorized into five different regions – North America, Europe, Asia-Pacific, the Middle East and Africa and South America. North America was the leader in the IoT market in 2020. Asia and the Pacific are expected to be the fastest growing markets from 2021 to 2027. The Asia-Pacific segment had the largest market share of 37.2% in 2020, with a market value of $ 106.1 million; it is expected to register the highest CAGR of 17.4% over the forecast period. The European segment was the second largest market in 2020, with a value of $ 91.3 million; it is projected to show a CAGR of 14.2%. North America is the second largest market and significant growth of the IoT market is expected, as the demand for agile, scalable and cost-effective computing is high in the region.

For example, one of the most dominant companies in the IoT market Microsoft focuses its business strategy on technological innovations that enable companies to maintain their position in a competitive environment. The company is focused on developing its complete portfolio of intelligent solutions by investing heavily in its Azure platform and building Cloud-based services integrated with artificial intelligence.

It is expected that the growth of the IoT will be led by factors such as low operational costs, increased use of IoT in healthcare, agriculture, all the more growing need for IoT safety, development of smart cities… There are predictions that the market will come to represent lucrative opportunities for investing due to increased adoption of IoT solutions based on blockchains for smart contracts and Edge computing.